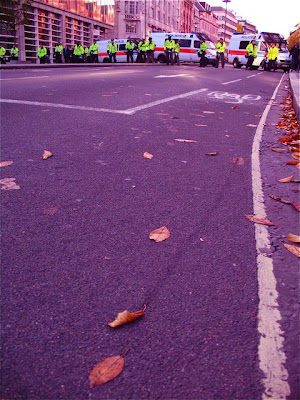 If a foreign country took this approach to its students' rights to peacefully protest, we would probably invade them, in the name of 'Democracy' - at least, we'd check whether they had oil, or whether we'd sold them any armaments recently.

The Metropolitan Police issued warnings about plastic bullets and water cannon, and the right-wing press lapped it up - if you don't have a strong argument against it, well you can intimidate it out of appearing, or kettle it when it does.

I turned up to witness. I met a number of people like me - pretty normal middle-aged people who celebrate the students' right to protest about their own future, and who were there to make sure that no liberties were taken - literally.

The students are angry about rich people who themselves benefitted from University grants making decisions to charge £9000 per year tuition. They're angry about 4000 Police Officers being provided to protect the Corporation of London - a secretive state within a state which makes the Vatican look honest - from a peaceful protest of a couple of thousand students. 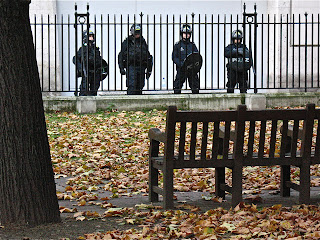 Where were these Police resources when Tottenham was burning, and Hackney, and Clapham ?

The students' arguments are inextricably linked to the Occupy protestors at St. Pauls Cathedral, who argue for higher taxes for the bankers who profit and get bonuses for destroying economies, businesses and livelihoods; for tax-evading corporations to be prevented from off-shoring billions in taxable profits.

Those Officers I spoke to were perfectly decent and helpful to me - they were simply doing a job and doing it well - so this is not an anti-Police rant. But I just wonder whether these Police Officers who protect that corporate machine will be able to send their own children to University, or get them a life-saving NHS operation if they're unfortunate enough to need it.
Posted by Mark E14 at 00:53

Mark E14
I'm an Architectural Technologist, interested in everything from green infrastructure and sustainable construction to 3D-printing and the new technologies of Industrial Revolution 3.0.