Green Roof on a Barge in Docklands 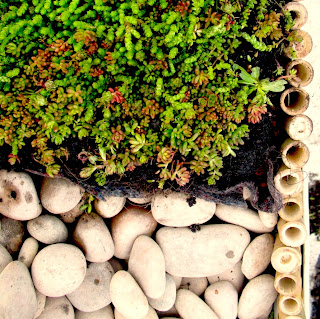 I've been wanting to build a green roof ever since I did a RESET course with Dusty Gedge and Gary Grant of Living Roofs a couple of years ago. However, when you look at the websites of suppliers and they're showing pictures of massive corporate roofs of several acres, my little order for 4 square metres didn't seem big enough to warrant anyone's interest.

Also, we wanted a wildflower meadow - a type of green roof which ordinarily needs a thick layer of substrate. This would have simply looked wrong, aesthetically, and would have spoiled the gracious lines of the boat (which, incidentally, is a Motorschipp built in Amsterdam in 1924).

Luckily, Wallbarn didn't make me feel inadequate when I phoned to enquire about small quantities of the materials I'd need to build a roof on the stern cabin of our Dutch barge. In addition, they offered an intriguing solution to our 'wildflower meadow' wish - they could supply sedum matting in a thin layer, but with a specialist London Wildflower mix seeded into the nursery-grown sedum. It will be hit-or-miss as to which of these species find a foothold in amongst the sedums, but that makes it all the more interesting and experimental. 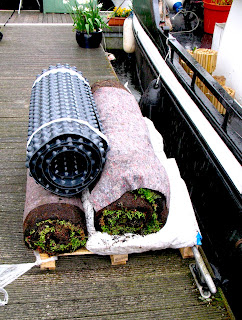 Steel boats are ideally suited to having green roofs. The deck is designed for the point-loads imposed by people and equipment, and so is structurally well capable of supporting the distributed load of a wet green roof.

The roof materials arrived on a pallet : a 20mm drainage layer, geotextiles, bagged substrate, and rolls of sedum matting grown on a coir-fibre mesh. It was important to unroll the sedum as soon as possible.

The roof itself had already been prepared by ensuring that all the paintwork was in good order, using Jotun marine-grade paints from Shepherd Marine and Vactan to stabilise any rust patches.

The roof was edged in bamboo supplied in 1m rolls, cut from their original 150mm down to 75mm to keep the profile low. 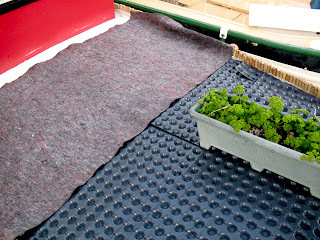 The green roof is built up with a series of layers to control drainage. In this case, a geotextile mat was first used to cushion the underlying roof, then a dimpled drainage layer (20mm dimples) is used to collect infiltrated rainwater and to supply water to the vegetation. This is covered with a second layer of geotextile to retain the substrate, a 40mm layer of crushed brick material with low organic content.

At the lowest point of the roof, a drainage channel of cobblestones allows excess rain to drain away. 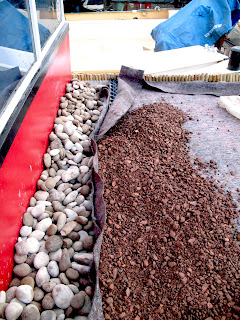 This picture shows the various layers meeting at the drainage channel - the detailing allows water into the channel, but retains the crushed substrate.

Once the substrate had been levelled out and lightly tamped with a block of wood, it was a fairly simple matter to roll out the sedum blankets, cut them to the shape of the roof with a sharp knife, and then water the roof liberally (in this case, the heavy rain showers that interrupted the whole build did the watering for us...

Then it was a case of sitting back to watch it grow and to wait for the wildflower seeds to begin pushing through. 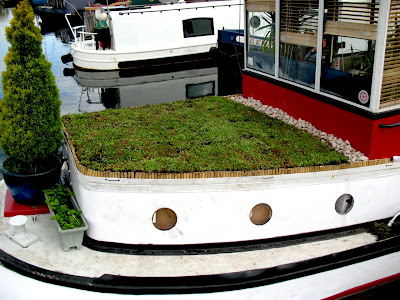 Apart from the obvious aesthetic qualities, green roofs have several major benefits, whether they're on a barge or a building. The most important factor, especially in the highly developed urban area in which we live, is the ability of vegetation (and soil) to remove air pollution. In addition, they're a major component of SUDS (Sustainable Urban Drainage Systems), slowly releasing rainfall to stormwater drains and so avoiding Combined Sewer Overflows (CSO's). (This isn't a major concern on a boat, surrounded by water...)

They're also beneficial in the thermal performance of buildings, providing an additional insulation layer which prevents both heat losses in winter and also heat gains in summer. Moreover, the evapotranspirative and albedo effects of growing vegetation both serve to cool the surrounding air, reducing the Urban Heat Island Effect (UHIE).

The important biodiversity potential of this roof will depend mostly on how many of the wildflower species take root in the sedum matting.

Other quantified benefits of green infrastructure components include health and well-being, and even reductions in crime.

My MSc Dissertation went into a lot more depth on these issues, and I'd be happy to email a copy of a conference paper that I presented on this subject if anyone out there reads this and wants to know more. Just DM me via Twitter.

It's unlikely that all the different species seeded into the sedum will survive. I'll be following how they do, and keeping an eye on what insect species are drawn to them. The species supplied were as follows :

I'll be blogging more about this green roof in future, as the roof beds in and as these wildflowers emerge. I'll be talking more about green infrastructure too.
Posted by Mark E14 at 20:28

Mark E14
I'm an Architectural Technologist, interested in everything from green infrastructure and sustainable construction to 3D-printing and the new technologies of Industrial Revolution 3.0.